Ava Berlin (with Sonni Pacheco)
Jeremy Lee Renner is an American actor, singer-songwriter, film producer, musician, and former makeup artist. Some of his notable movie roles include playing Brian Gamble in S.W.A.T., William James in The Hurt Locker, James Coughin in The Town, William Brandt in the Mission Impossible film series, Aaron Cross in the Jason Bourne film series, and Gary Webb in Kill the Messenger. 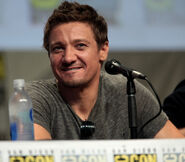 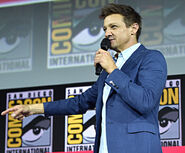 Jeremy Renner speaks at the 2019 San Diego Comic Con.
Add a photo to this gallery

Retrieved from "https://disney.fandom.com/wiki/Jeremy_Renner?oldid=3895450"
Community content is available under CC-BY-SA unless otherwise noted.