2004-present
Jaden Jeremy Shada is an American voice actor, singer, and musician who is best known for his work as the voice of Finn the Human from the American animated television series Adventure Time. He is also known for starring as various characters in the sketch-comedy series Incredible Crew and voiced Lance in Voltron: Legendary Defender. Shada is also known as the bass player and secondary vocalist in the rock band Make Out Monday.

For Disney, he voiced Sean in The Secret of the Magic Gourd and Ross Caliban in Spider-Man. 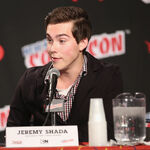 Retrieved from "https://disney.fandom.com/wiki/Jeremy_Shada?oldid=3911138"
Community content is available under CC-BY-SA unless otherwise noted.