Supervisor of the Scare Floor

Jerry (credited as Floor Manager) is a minor character in Disney/Pixar's 2001 animated film, Monsters, Inc. Jerry is the floor manager for Monsters, Inc. He is a supervisor of Scare Floor F, where Mike and Sulley work.

Jerry is the floor manager for Monsters, Inc. He is a supervisor of Scare Floor F, where Mike and Sulley work.

He first appears in a commercial for Monsters, Inc. that Mike and Sulley watch in their apartment room.

He counts down the amount of time left in seconds (he has 7 fingers on each hand) until it is time for the monsters to go into the human world to scare the children to harvest energy.

When George Sanderson exits a child's room with a sock attached to his back, Charlie alerts to Jerry, who rushes over to activate the alarm that summons the CDA.

He is last seen near the entrance to the factory among the other monsters watching Waternoose get arrested by the CDA. 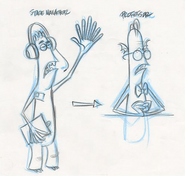 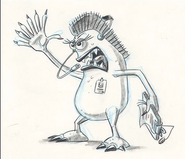