Robert Colonna (adopted)
Gerardo Luigi "Jerry" Colonna was an American musician, actor, comedian, singer, songwriter, and trombonist who provided the voice of the March Hare in Alice in Wonderland (1951) and also lent his zany narration style to the Disney shorts: "Casey at the Bat" from Make Mine Music (1946) and The Brave Engineer (1950), in the latter short, he also lent his voice to Casey Jones and his brake-man.

Colonna is best remembered as the zaniest of Bob Hope's sidekicks in Hope's popular radio shows, USO tours, television specials and films of the 1940s and 1950s. Some of his film appearances include Road to Singapore, Road to Rio, The Road to Hong Kong, It's in the Bag!, Star Spangled Rhythm, Meet Me in Las Vegas, True to the Army, Rosalie, Ice-Capades Revue and Andy Hardy Comes Home.

A heart attack in 1979 forced him to spend the last seven years of his life in the Motion Picture and Television Hospital, where he died of kidney failure in 1986.

The Brake-Man
(The Brave Engineer) 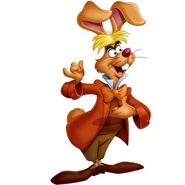 March Hare
(Alice in Wonderland)
Add a photo to this gallery
Retrieved from "https://disney.fandom.com/wiki/Jerry_Colonna?oldid=4517428"
Community content is available under CC-BY-SA unless otherwise noted.