2
Jeremiah "Jerry" O'Connell is an American actor, screenwriter, producer, and director. He is known for his role as Verne Tessio in the 1987 drama Stand By Me and Charlie Carbone in the 2003 comedy Kangaroo Jack.

For Disney, he voiced Pip the Pirate Genie, in the Jake and the Never Land Pirates episodes "Pirate Genie-In-A Bottle!" and "Pirate Genie Tales" and played Phil Ohlmyer in Mission to Mars. He also plays Robert in the ABC TV show, Mistresses and Nick Diamond, Gabi's father in Freeform's sitcom Young & Hungry. He even directed the Andi Mack episode "Dad Influence". 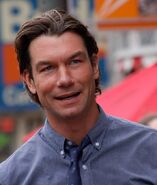 Jerry O'Connell taking a stroll in Hollywood in June 2013. 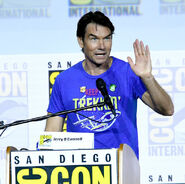 Jerry O'Connell speaks at the 2019 San Diego Comic Con.
Add a photo to this gallery

Retrieved from "https://disney.fandom.com/wiki/Jerry_O%27Connell?oldid=4308088"
Community content is available under CC-BY-SA unless otherwise noted.