Ben and Amy
Gerald Isaac "Jerry" Stiller was an American stand-up comedian, actor, voice artist, comedian, and the father of Ben Stiller, best known for his roles as Frank Costanza on the NBC sitcom Seinfeld from 1993 to 1998 and as Arthur Spooner on the CBS sitcom The King of Queens from 1998 to 2007.

For Disney, he voiced Pretty Boy in Teacher's Pet, Principal Stickler in Fish Hooks, the Caucasian Eagle in Hercules, Uncle Max in The Lion King 1½, and Harvey in Planes: Fire & Rescue (in which Harvey's spouse, Winnie, was voiced by his wife, Anne Meara). He also played Harvey Bushkin in Heavyweights and Nathan in On the Line. 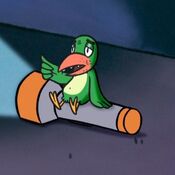