Cara Harnell (2019-present)
Jessie Quinn "Jess" Harnell is an American voice actor, singer, and musician, who has done several voice roles for Disney, most notably the modern appearances of Br'er Rabbit. He contributed to films, like The Hunchback of Notre Dame, Toy Story 2, Lilo & Stitch, Zootopia, and Cars. Some of his television credits include Sofia the First, Elena of Avalor, Tangled: The Series, and Bonkers.

Additionally, he has been the current announcer for the ABC reality program series America's Funniest Home Videos since 1998.

Outside of Disney, Harnell is best known for his voice roles as Wakko Warner in the Warner Bros. animated series Animaniacs, Hunter in Road Rovers, and as the current voice of the titular character in the Crash Bandicoot video game franchise. His other well-known roles include voicing Ironhide and Barricade in the Transformers film series, Jerry Lewis in Totally Spies! (first two seasons), ETC (Elite Tauren Chieftain) in Heroes of the Storm, and Dirk in Clifford's Really Big Movie. He is also known for being the lead singer and musician of his rock band Rock Sugar. 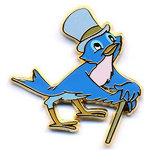 Ziggy
(House of Mouse and The Jungle Book 2)

Eugene and Wendell
(The Buzz on Maggie)

Pocket
(Tangled: Before Ever After and Tangled: The Series)

The Jaguar King
(Elena of Avalor)