Marvel's Jessica Jones is a Netflix show based around the Marvel character Jessica Jones. It is set in the Marvel Cinematic Universe (MCU), sharing continuity with the films of the franchise.

The series stars Krysten Ritter as Jessica Jones, a former superhero who opens her own detective agency. It is the second in a series of shows that lead up to a Defenders crossover miniseries, and is produced by Marvel Television and ABC Studios, with Melissa Rosenberg serving as showrunner. The series premiered on November 20, 2015.

The series was cancelled in 2019. The third season, which aired that year, was the final season of the show. With the rest of the MCU Netflix shows being cancelled, Season 3 of Jessica Jones served as the ending for the "Netflix" portion of the MCU. It was added to Disney+ on March 16, 2022

"Ever since her short-lived stint as a Super Hero ended in tragedy, Jessica Jones has been rebuilding her personal life and career as a hot-tempered, sardonic, badass private detective in Hell's Kitchen, New York City. Plagued by self-loathing, and a wicked case of PTSD, Jessica battles demons from within and without, using her extraordinary abilities as an unlikely champion for those in need... especially if they're willing to cut her a check."

Original Logo as "A.K.A. Jessica Jones".

An older logo with the new title. 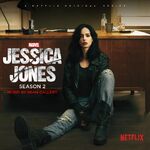