This article is about the Disney Channel series. For the Toy Story character, see Jessie.

“It feels like a party e-ver-y-day, hey Jessie!”
―Lyrics from the show's theme

Jessie is an American sitcom which premiered on September 30, 2011 on Disney Channel. The series was created and executive produced by Pamela Eells O'Connell and stars Debby Ryan as Jessie Prescott, a small town Texas girl who moves to New York City and becomes a nanny to a high profile couple's four children played by Peyton List, Cameron Boyce, Karan Brar, and Skai Jackson. On March 11, 2012, Disney announced that Jessie had been renewed for a second season and that a telefilm based on the series was in development. Filming for the second season began on July 9, 2012. Season 2 premiered on October 5, 2012.

On March 28, 2013, the series was renewed for a third season, with production resuming in July 2013. Season 3 premiered on October 5, 2013. On April 16, 2014, according to ABC News, Jessie will get engaged in a four-episode arc that will conclude the season in the fall, marking the first time a Disney Channel lead character has gotten engaged.

The series follows Jessie Prescott, a 19-year old small town girl with big dreams who, rebelling against her strict Marine Sergeant father, decides to leave the military base in Texas where she grew up and moves to New York City. She accepts a job as a nanny and moves into a two million dollar penthouse on the Upper West Side with the wealthy Ross family which includes: jet-setting parents, Morgan and Christina; and their four rambunctious children: Emma, Luke, Ravi and Zuri; along with the family pet (and Ravi's companion) Mrs. Kipling, a seven-foot monitor lizard. With a whole new world of experiences open to her, Jessie embarks on new adventures in the big city as she grows to rely on the love and support of the children in her care. Assisting her are Bertram, the family’s sarcastic butler, and Tony Chiccolini , the building's 20-year old doorman.

The series was created by Pamela Eells O'Connell who'd had previous experience with the "nanny" sitcom formula, starting her career as a writer on the series, Charles in Charge and serving as co-executive producer on The Nanny, before working with Debby Ryan on The Suite Life on Deck. O'Connell is said to have developed Jessie specifically to showcase Ryan's talent. In an interview with the Star-Telegram, Ryan explained how the concept originated - "(O'Connell) and I were throwing ideas back and forth when The Suite Life was coming to an end, and she came up with this. I was absolutely captivated. Then Disney looked at the script and the showrunner (O'Connell) and myself and they were like: 'Awesome. We like it. You're on in the fall'". In interviews with Variety, Disney CEO, Gary Marsh spoke of working with Ryan again, - "It's been thrilling to watch Debby grow from an unknown actress to one of our top stars. Debby is a talented young actress who connects to a wide fanbase because she's genuine, relatable and aspirational all at once. Our viewers have followed her from The Suite Life on Deck to 16 Wishes, and we're pleased to be working with her again."

With Ryan signed on, Disney Channel began the search to cast the Ross family in May 2011. Before casting was finalized, there were numerous differences in the original concept for several of the characters. The role of mother to the Ross children was originally a photographer named "Pandora", the role of eldest daughter, Emma was originally named "Anabel", the role of Luke was originally a boy adopted from Korea named "Hiro" and the role of Ravi was originally a boy adopted from South America named "Javier" who had a pet capybara instead of a monitor lizard. Some have speculated that Brad Pitt and Angelina Jolie, as a prominent celebrity couple with a multicultural adoptive family, may have been one possible inspiration for the series. In an interview with the Boston Herald, O'Connell described her inspiration, saying - "I thought the celebrity parents and gorgeous penthouse would be glamorous, and a nice contrast to Jessie’s more modest Texas roots. That fish out of water element makes for good stories, and I was inspired by many families who have adopted children of different ethnicities."

After casting was finalized and changes were made to several of the characters to suit the actors chosen, the series skipped the pilot phase and was put directly into production. Filming began in June 2011 on Stage 3/8 at Hollywood Center Studios which, prior to start of production, served as the soundstage where the Disney Channel series, Wizards of Waverly Place was taped. Thirteen episodes were originally ordered for the first season, but while the show's first season was in production, Disney Channel ordered an additional seven episodes bringing the total number of episodes for the first season to twenty. When asked about the atmosphere on set during an interview with MSN TV, Ryan described her relationship with the young cast - "I definitely feel like a nanny! They are smart kids, but they're real kids. They like to have fun. My policy is: We can play hard, as long as we work hard, and because we work hard, we need to play hard."

In November 2012, Disney Channel announced that the show will crossover with Austin & Ally as a one-hour special episode titled "Austin & JESSIE & Ally All Star New Year." It aired on December 7, 2012.

In November 2013, a crossover between Jessie and Good Luck Charlie aired. It was a one-hour Christmas special titled, "Good Luck Jessie: NYC Christmas." It aired on November 29, 2013. 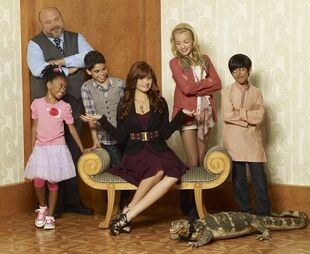 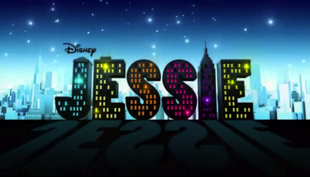 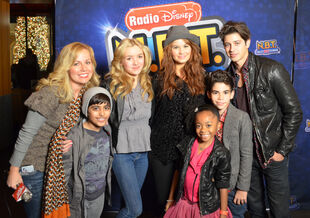 Cast of Jessie at a premiere 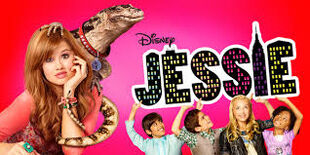 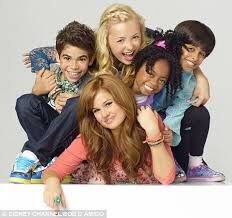 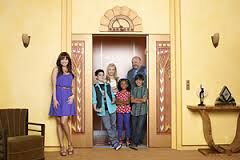 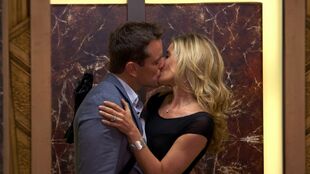 Christina and Morgan kissing in the elevator