Illusion, magic
The Jesters (named Harlequin, Lollipop, and Tricksy) are a trio of magicians and the secondary antagonists of Disney's 1998 animated sequel, Pocahontas II: Journey to a New World, the sequel to the 1995 animated feature, Pocahontas. They are Governor Ratcliffe's minions. 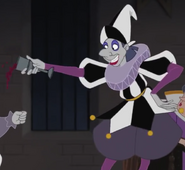 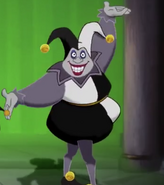 Pocahontas yells Harlequin to stop as he turns dreadful in fear