Disney Wiki
Register
Don't have an account?
Sign In
Advertisement
in: Characters, Superheroes, Characters who fly,
and 10 more

Steve Stronghold (husband)
Will Stronghold (son)
Jetstream (Josie Stronghold) is one of the two tritagonists and a famed superheroine in the film Sky High. She was portrayed by the late Kelly Preston. Jetstream is a world famous superheroine who has the power of supersonic flight and is a master of unarmed combat. Her alter ego is Josie Stronghold, a real estate agent, the wife of Steve Stronghold, The Commander and the mother of a teenage boy named Will. She takes her ‘cover job’, as a real estate agent, the "family business" very seriously.

Born in 1960, Josie DeMarco eventually discovered her powers of supersonic flight and therefore was eligible to enroll at Sky High. She received her mutated education at the same time as Steve, whom she fell in love with, and Sue Tenny, who she would remember many years later as strange. As Principal Powers is close in age with Jetstream, she may have been a schoolmate as well.

After graduation, she became a superhero known as and worked by day as a real estate agent. Although young heroes who graduate from Sky High were usually assigned a sidekick, she prefers to operate as a solo superhero.

On 1985, she got a call from the Mayor and learned that the Commander and his sidekick, Jonathan Boy, had been captured by a supervillain named Royal Pain and her sidekick Stitches, and rather literally swooped into action, bursting in through a window and attacking Royal Pain with the element of surprise. Together, they destroyed Royal Pain's secret weapon, the Pacifier. Unbeknownst to the trio, Royal Pain survived the explosion and she was actually Sue wearing armor. It can be assumed that, like her husband, Jetstream believed, due to Royal Pain's electronic voice, that Royal Pain was male. She and The Commander started flirting with each other as they both make their leave with the destroyed Pacifier. They unknowingly forgot All American Boy who was still tied up and left behind.

The were eventually married and Jetstream and The Commander became a husband and wife team against the forces of evil. The Commander worked with her on real estate and they settled into a house and secretly built the Secret Sanctum underground, where they stored the Pacifier.

They would continue to do good and battle with forces of darkness, such as a large creature with a tentacle as large as she is, or common criminals, whom she and the Commander are known to fight five at a time. They also bested King Kamurah, whose wooden surf board (which presumably was by no means ordinary, considering Stitches recognized it at once) was stored in the Sanctum.

Either before or after besting him, and around half a decade after defeating Royal Pain, they had an affair, resulting in the birth of their son, Will Stronghold. The Commander and Jetstream became renowned for their triumphs, even being widely considered the world's greatest superheroes.

Jetstream is a powerful and righteous superhero, but off the battlefield, she is also a devoted wife and mother. At the beginning of the film, she reminisced about when Will was a little kid, to which Will replied, embarrassed, "Mom!" She also appeared to be worried about Will too much, until Steve told her to stop treating him like a baby.

In the film, Josie is first seen having breakfast with Will and Layla Williams. She and Steve are then called on a mission to defeat a giant robot terrorizing the city. 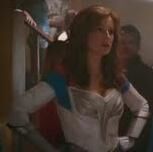