Salem from "Sabrina the Teenage Witch"

Lily, helping Kiki, when things go according to plan, talking to Lily

When things go wrong, Lily (formerly), snobby characters, danger, Kiki being too critical of herself.

Jiji is Kiki's companion as she is training to become a full-fledged witch. One time, he has to pretend to be a stuffed cat for a boy's birthday gift. The real stuffed cat which looked exactly like him, was lost in the forest and Kiki had to go find it. This was during Kiki's first delivery.

Jiji also gets a girlfriend, a white cat named Lily. In the credits, it is revealed that Jiji and Lily had four kittens, with three bearing a close resemblance to Lily and one looking exactly the same as Jiji. 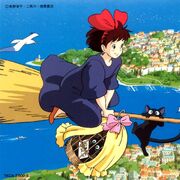