2008–present
Jillian Rose Reed is an American actress and voice actress. She is probably best known for her role as Tamara Kaplan in MTV's TV series Awkward.

For Disney, she played Tessa in the Pair of Kings episode "The One About Mikayla's Friends" and Abby in the Jessie episode "Acting with the Frenemy". She also voiced Naomi in the Disney Channel/Disney Junior animated series Elena of Avalor. 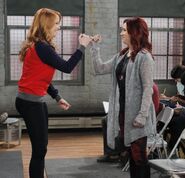