Anastasia Lewis (1987-present)
James "Jim" Broadbent is an English theatre, film, and television actor. He played Professor Horace Slughorn in the Harry Potter movies, Pod Clock in The Borrowers, and Mr. Gruber in the Paddington movies. He also voiced Madame Gasket 9in Blue Sky's 2005 animated film, Robots. He recently voiced the Voice Trumpets in the 2015 reboot of Teletubbies.

For Disney, he portrayed the villain Lord Kelvin in the 2004 Disney adventure comedy film, Around the World in 80 Days, voiced Sergeant in Valiant, and played Professor Digory Kirke in The Chronicles of Narnia: The Lion, the Witch and the Wardrobe. 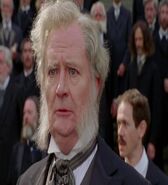 Lord Kelvin
(Around the World in 80 Days)

Sergeant Monty
(Valiant)
Add a photo to this gallery

Jim Broadbent attending the 51st annual New York Film Fest in September 2013.
Add a photo to this gallery
Retrieved from "https://disney.fandom.com/wiki/Jim_Broadbent?oldid=4070672"
Community content is available under CC-BY-SA unless otherwise noted.