4
Jim Dale, MBE is an English actor, voice actor, singer, and songwriter who is best known as the narrator for the U.S. version of all seven of the Harry Potter audiobooks (for which he received two Grammy Awards out of six nominations).

For Disney, he played Doc Terminus in Pete's Dragon, Jasper Bloodshy and his sons: Wild Billy and Eli in Hot Lead and Cold Feet, and Sir Mordred in Unidentified Flying Oddball. He was considered the role as Bert in Mary Poppins, along with other several actors that were considered, but the role was later given to Dick Van Dyke. He was also considered to play Barnaby in Babes in Toyland. 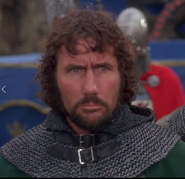 Ray Bolger as Barnaby in Babes in Toyland, a role Dale could have been given
Add a photo to this gallery
Retrieved from "https://disney.fandom.com/wiki/Jim_Dale?oldid=4499397"
Community content is available under CC-BY-SA unless otherwise noted.