Brian Henson
John Henson
Lisa Henson
Cheryl Henson
Heather Henson
Jim Henson was a puppeteer and filmmaker best known as the creator of The Muppets and the founder of The Jim Henson Company, which is now run by his children.

He was known for some of his Muppet characters such as Kermit the Frog, Rowlf the Dog, Dr. Teeth, The Swedish Chef, Waldorf, The Muppet Newsman, Link Hogthrob and Mahna Mahna.

He also performed Ernie, Guy Smiley and others on Sesame Street, Cantus the Minstrel and Convincing John on Fraggle Rock and many other characters.

After working together for so many years, every one of Henson's fellow Muppeteers eventually grew very close to him in no time at all. However, the man that it is quite clear Jim was always closest with was Frank Oz, cause of the incredible partnership and friendship that they shared. There have been countless occasions where Henson's characters were partnered up Oz's characters. While it was actually Richard Hunt who voiced Statler to Jim Henson's Waldorf, (the famous hecklers from The Muppet Show), the friendship that Henson and Oz shared was the best in the whole Muppet business. At his Memorial Service, 5 short days after Jim's death, Frank speaks of a Christmas gift Jim gave him, which he called "Bert in Self-Contemplation". He starts to cry but manages to say "That's when I knew, he loved me & I loved him".

In late 1989, Jim Henson made a radical change in his career. Wanting to become less of a businessman and focus more on the creative side of the production, he entered into talks with Michael Eisner to sell his company and characters (minus Sesame Street) to the Walt Disney Company. Two of his very last projects actually involved Walt Disney World in one way or another. On May 6th, 1990, The Muppets at Walt Disney World' premiered, as a special about the Muppets going to Kermit's home swamp and soon after, Walt Disney World. The other last project was Jim Henson's Muppet*Vision 3-D, a three dimensional attraction currently located at Disney's Hollywood Studios. After Henson's sudden and untimely death, negotiations went awry, and Disney didn't acquire the Muppets till February 2004, which it now controls through the wholly owned subsidiary The Muppets Studio.

Jim became infected with a very rare bacterium called Group A streptococcus in May 1990 that was discovered too late for him to receive proper treatment. He died at 1:21 a.m. on Wednesday, May 16th, 1990, approximately 20 hours & 23 minutes after checking himself into the emergency room at New York Hospital, not realizing how sick he really was. Steve Whitmire then took over for Kermit the Frog, only months after Jim passed away, then he took over for Ernie in 1993 to Frank Oz's Bert on Sesame Street. Waldorf, in 1992, had been taken over by Dave Goelz. Starting in 1991 the role of Dr. Teeth had been officially taken over by John Kennedy, however, the character only had made brief appearances with very little dialogue. However, following his death, Rowlf the Dog was kept completely silent until episode 2 of Muppets Tonight, on which Rowlf broke his silence thanks to the vocal help of Bill Barretta, who now voices the Swedish Chef, Mahna Mahna & Dr. Teeth, as of 2005.

According to FindAGrave.com, Henson was cremated, & his ashes were scattered at his ranch outside Santa Fe, New Mexico.

Jim Henson's legacy is carried on in different forms today. Sesame Workshop (formerly the Children's Television Workshop) owns all the Sesame Street characters and continues to experiment with its format. However, in 2001, they lost the rights to Kermit, as he was mainly part of the Muppets. As noted, the Walt Disney Company owns the Muppet characters & continues to use them in new productions. Fortunately, the Jim Henson Company itself, under the guidance of Henson's children Brian, Lisa, & Cheryl, John, & Heather, continues to release new material, including Creature Shop films & original content.

In 2011, Jim Henson was posthumously awarded the Disney Legends award at the D23 Expo in 2011. His oldest son and daughter, Brian and Lisa, accepted it on his behalf. 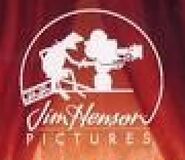 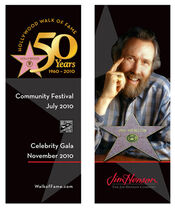 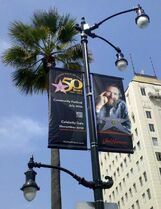 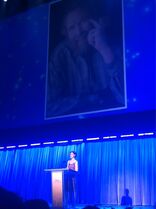 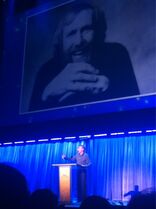 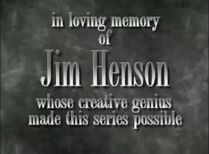 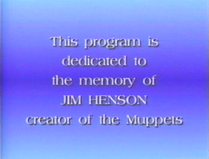 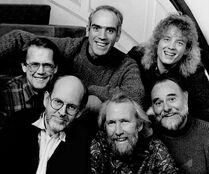 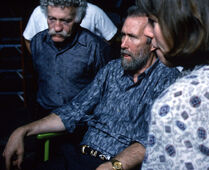 Jim Henson wearing a Mickey Mouse watch on the set of Muppet*Vision 3D.
Add a photo to this gallery

Retrieved from "https://disney.fandom.com/wiki/Jim_Henson?oldid=1999867"
Community content is available under CC-BY-SA unless otherwise noted.