1995-present
James Michael "Jim" Rash is an American actor, voice actor, comedian, producer, and screenwriter, who is best known for playing Dean Pelton on the NBC sitcom Community since 2009 until 2016. In 2012, he received a Golden Globe nomination and won an Academy Award for Best Adapted Screenplay for the film, The Descendants.

For Disney, he voices Principal Slimovitz in the Disney XD animated series Randy Cunningham: 9th Grade Ninja, Mr. Thornberg in Vampirina, Sinker in Jake and the Never Land Pirates, and played Stitches in the 2005 Disney superhero comedy film, Sky High, and M.I.T. Liaison in Captain America: Civil War. He also provides the voice of Gyro Gearloose and the Gizmosuit in the DuckTales reboot series.[1][2] He also voiced Ted in Big City Greens and Orka in Star Wars Resistance, and he directed the Fox film, Downhill. 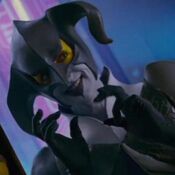 Ted
(Big City Greens)
Add a photo to this gallery

Jim Rash and Nat Faxon at premiere of The Way, Way Back in June 2013.

Jim Rash at premiere of Captain America: Civil War in April 2016.
Add a photo to this gallery

Retrieved from "https://disney.fandom.com/wiki/Jim_Rash?oldid=4170593"
Community content is available under CC-BY-SA unless otherwise noted.