Jacqueline Drew (1977-1983)
Jane Varney (1988-1991)
James Albert "Jim" Varney, Jr. was an American actor, comedian and writer, best known for his role as Ernest P. Worrell, who first appeared in a series of commercials popular in the United States, especially Nashville, Tennessee. Disney took notice of the character's popularity and produced a feature film called Ernest Goes to Camp, starring Varney as Ernest. Varney's acting abilities led him to many roles both as an actor and a voice artist.

For Disney, besides playing Ernest P. Worrell in the Ernest film franchise, he is also known for providing the voice of Slinky Dog in Toy Story, Toy Story 2, and Animated StoryBook: Toy Story and Toy Story: Activity Center. He also voiced Ephialtes in the Hercules episode "Hercules and the Muse of Dance." Shortly before work began on Toy Story 2, Varney was diagnosed with lung cancer and died while he was recording lines for Atlantis: The Lost Empire, which was released a year after his death. Since Toy Story 3, his friend, Blake Clark took over as the voice of Slinky. 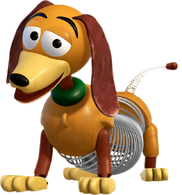 Varney behind the scenes of Toy Story
Add a photo to this gallery
Retrieved from "https://disney.fandom.com/wiki/Jim_Varney?oldid=4240640"
Community content is available under CC-BY-SA unless otherwise noted.