James Kevin "Jim" Ward is an American actor and voice actor known for his role as Captain Qwark in the Ratchet and Clank video games, Chet Ubetcha and Doug Dimmadone on The Fairly Odd Parents, Angus on The Secret Files of the Spy Dogs, Professor Xavier in Wolverine and the X-Men, Diamondhead in Ben 10 and Ben 10: Destroy All Aliens, and Henry Peter Gyrich in Avengers: Earth's Mightiest Heroes.

For Disney, he provided the voice of the narrator in Playhouse Disney's show short, The Adventures in Nutrition with Captain Carlos, Grandpop Krank in Higglytown Heroes. He also voiced Dodger in the Oliver & Company Disney Read-Along, Torrance in Treasure Planet, River Spirit in the English dub of Spirited Away, and the additional voices in the English dub of Porco Rosso. He even did additional voices in Pixar films, such as Cars and Inside Out, as well as the Pixar short, Small Fry. In Hercules, he voiced the Ice Titan, though he is uncredited. 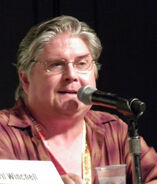 Jim Ward speaks at the 2012 San Diego Comic Con.
Add a photo to this gallery
Retrieved from "https://disney.fandom.com/wiki/Jim_Ward?oldid=4062249"
Community content is available under CC-BY-SA unless otherwise noted.