Roberta Cullen (?-1991; his death)[1]
Jimmy MacDonald was a Scottish-born American foley artist, animator, voice actor, musician, and the original head of the Disney sound effects department. He was also the voice of Mickey Mouse from 1947 to 1977.

By 1947, Walt Disney was getting too busy and too hoarse from smoking to continue voicing Mickey Mouse, so he was replaced by MacDonald, after the film Fun and Fancy Free. (A common misconception is that MacDonald had voiced additional dialogue shared with Disney in that film.) MacDonald voiced the mouse on a regular basis until 1953 (Disney had briefly taken over for The Mickey Mouse Club) and a recurring one until his retirment in 1977, when he was replaced by young Disney sound effects man Wayne Allwine for The New Mickey Mouse Club; Allwine's first theatrical role for Mickey was in Mickey's Christmas Carol.

Herbie (The Love Bug)
Add a photo to this gallery 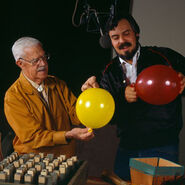 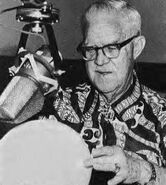