One of Bonkers' sidekicks

As his name suggests, Jitters is nervous and worrisome, though he is loyal to Bonkers. As a result of his bad luck and frequent physical injury to his person, he often utters, "I hate my life".

Jitters used to work at Wackytoon Studios acting in He's Bonkers, segment to Raw Toonage. He played the role of Bonkers' pal who always got into trouble. In real life, Jitters tries to avoid Bonkers, because every time they meet, Jitters ends up squeezed by an anvil, ran over by a bulldozer, or blown to pieces by a bomb.

In the short "Get Me to the Church on Time", he marries an elephant named Tanya. 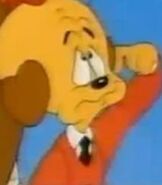