Emerson Jay
Sailor Stevie
JoAnna Lynn García (sometimes credited as JoAnna García Swisher), is an American actress and voice actress. She is best known for her role as Cheyenne Hart Montgomery on The WB/The CW sitcom Reba from 2001 to 2007.

For Disney, she played Ariel on the ABC fantasy-drama series Once Upon a Time and voiced Shannon in the Kick Buttowski: Suburban Daredevil episode, "Pool Daze". She also played Betty Grissom in the ABC TV show, The Astronaut Wives Club and Amy Cabrera in the ABC TV show, Kevin (Probably Saves The World).

Ariel
(Once Upon a Time) 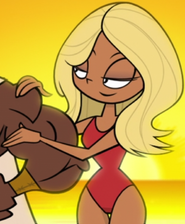 Joanna Garcia speaks at the Animal Practice panel of the NBC portion of the 2012 Summer TCA Tour.
Add a photo to this gallery
Retrieved from "https://disney.fandom.com/wiki/JoAnna_Garcia?oldid=4271553"
Community content is available under CC-BY-SA unless otherwise noted.