To help the elderly ladies save the Inn

Silky Seymour and his thugs

Silky, his thugs, Silky not paying the money he owes them for the Inn, losing the money, Steve "hallucinating", and seeing the elderly ladies sad

Pursues her future happily with Steve while watching Blackbeard depart to join his ghostly crew after being released from his curse for performing a good deed.

"You know something? I loved you even when I thought you were nuts."
Jo Anne Baker is the tritagonist in Disney's 1968 live-action film, Blackbeard's Ghost. She is a professor of the Godolphin students and Steve Walker's love interest.

Jo Anne is first seen at the aucion of Blackbeard's Inn. She is at first mistaken for the girl whom men have to pay $1 for a kiss by the newly arrived coach, Steve Walker when Steve kisses her.

Jo Anne at the inn

Jo Anne during the inn's auction

Jo Anne thanking Steve for his good actions at the auction

Jo Anne and Steve at the restaurant 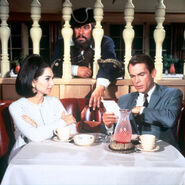 Jo Anne telling Steve that her money's been stolen

Jo Anne watching Steve go "by himself" to Seymour's place

Seymour trying to take the money from Jo Anne

Jo Anne helped out by Steve

"You know something? I loved you even when I thought you were nuts."
Add a photo to this gallery

Retrieved from "https://disney.fandom.com/wiki/Jo_Anne_Baker?oldid=4058779"
Community content is available under CC-BY-SA unless otherwise noted.