1982-present
Joaquin Rafael Phoenix (formerly credited as Leaf Phoenix), is a Puerto Rican-American actor, music video director, producer, musician, and social activist, who is well known for his roles as Commodus in the 2000 epic historical drama film, Gladiator, which earned him an Academy Award for Best Supporting Actor nomination. He also earned an Academy Award for Best Actor nomination for his roles as Johnny Cash in Walk the Line (2005), Freddie Quell in The Master (2012), and Arthur Fleck/Joker in Joker (2019), the 3rd which he won.

For Disney, he voiced Kenai in the 2003 Disney animated feature film, Brother Bear, and portrayed Merrill Hess in the 2002 Touchstone Pictures film, Signs, Jack Morrison in Ladder 49, and Lucias Hunt in The Village.

He is currently in talks to play Captain Hook in the upcoming Peter Pan and Wendy film. 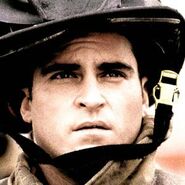 Lucias Hunt
(The Village)
Add a photo to this gallery

Joaquin Phoenix behind the scenes of Brother Bear.

Joaquin Phoenix with his sisters, Summer, Liberty, and Rain and their mother, Arlyn attending the 35th Annual PETA party in September 2015.

Joaquin Phoenix poses in the Pressroom at the 92nd annual Academy Awards in February 2020.
Add a photo to this gallery

Retrieved from "https://disney.fandom.com/wiki/Joaquin_Phoenix?oldid=4300378"
Community content is available under CC-BY-SA unless otherwise noted.