Charles and Christopher
Alicia Christian "Jodie" Foster is an American actress, film director, and producer. She is best known for her role as Clarice Starling in the 1991 horror-thriller Silence of the Lambs. She also played Eleanor Arroway in the 1997 thriller Contact, Alexandra Rover in the 2008 adventure comedy film Nim's Island. She is also the founder of the production company Egg Pictures. 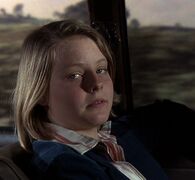 Casey Brown
(Candleshoe)
Add a photo to this gallery

Jodie Foster at her Hollywood Walk of Fame ceremony in May 2016.

Jodie Foster speaks onstage during the 25th annual Screen Actors Guild Awards in January 2019.
Add a photo to this gallery

Retrieved from "https://disney.fandom.com/wiki/Jodie_Foster?oldid=4323620"
Community content is available under CC-BY-SA unless otherwise noted.