1989–present
Joseph Michael "Joe" Ansolabehere (pronounced “An-so-leh-bare”) is an American animation screenwriter and producer. He is the co-creator of Recess and Lloyd in Space with partner and friend Paul Germain.

He was also the executive producer for the movie Recess: School's Out, and has recently been credited as a screenwriter on Tinker Bell and the Great Fairy Rescue. He also wrote several episodes on the Disney Channel original series Miles from Tomorrowland and Big Hero 6: The Series.

Outside of Disney, Joe has written on series for Nickelodeon including Hey Arnold! and Rugrats. 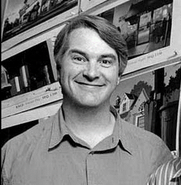 Joe ANsolabehere in front of Recess storyboards.
Add a photo to this gallery
Retrieved from "https://disney.fandom.com/wiki/Joe_Ansolabehere?oldid=3978437"
Community content is available under CC-BY-SA unless otherwise noted.