1976–present
Joe Flaherty is an American actor, voice actor, and comedian. He is best known for his work on the Canadian sketch comedy show, SCTV from 1976 to 1984 (where he also served as a writer), and for his role as Harold Weir on the teen comedy drama series Freaks and Geeks.

For Disney, he voiced Jeb in the 2004 animated film, Home on the Range and Hooft in The Legend of Tarzan. 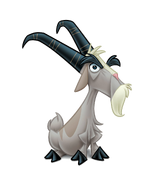 Jeb
(Home on the Range)

Hooft
(The Legend of Tarzan)
Add a photo to this gallery
Retrieved from "https://disney.fandom.com/wiki/Joe_Flaherty?oldid=4459284"
Community content is available under CC-BY-SA unless otherwise noted.