Quarterback for the Boston Rebels

To be the best quarterback in the NFL

“My dad didn't have much of a heads-up on this whole father thing and he is still getting the hang of things. But it's like everything else in his life. He never says 'no.' I mean, he's teaching me that you can do anything if you've got motivation and determination. And the place where that starts is right here, in the heart.”
―Peyton Kelly

Joe Kingman is the protagonist of the film The Game Plan.

Joe is a superstar quarterback for the Boston Rebels. Even as a young man, he loved the game of football, and he worked hard to secure a spot in the professional aspect of the game. However, he also grew up a little bit spoiled and very egotistical, due to the knowledge he had of his great talent. Early in his career, he married a young woman named Sara Kelly, but they divorced after a year of being together. After they divorced, she learned that she was pregnant with their child, although she never revealed the news to him.

About eight years later, Sara dies in a car accident, and her young daughter, Peyton, decides it is time to meet her biological father. Around this time, Joe's career has reached its all-time peak, as the Rebels are on their way to the playoffs. When he finally meets Peyton on his front doorstep, it throws him for a loop. Not only is he shocked to learn that he has a daughter, but he also has to deal with ballet classes and recitals (which he also has to participate in), trading in his sports car for a station wagon, waking up first thing in the morning to hear classical music playing on the stereo, and even seeing his dog, Spike, wear pink nail polish and a tutu. At first, his selfishness and arrogance get the better of him (he once forgets about Peyton, and leaves her alone in his new restaurant and bar at three in the morning), but his heart eventually warms to Peyton, and they share a beautiful father-daughter relationship. His career in football never falters; he brings the team all the way to the championship game.

However, during lunch at a local restaurant, Peyton has a bad allergic reaction to nuts, and Joe takes her to the hospital. Her aunt, Karen Kelly, discovers that she had snuck to Boston to meet Joe, rather than join another ballet school like she claimed and that Sara died in a car accident six months ago, and Karen demands to take custody of her, reasoning that Joe is not a very good father.

Joe is very saddened by Peyton's departure, and his performance in the championship game reflects that. He takes a really bad hit, and has to sit out for the rest of the game. However, Peyton shows up to see him play, and the joy of seeing her again gives him the strength to finish the rest of the game. Karen comes to Boston with her, and tells Joe that she needs to be with him, giving him her blessing to have her live with him. He, with a new attitude about the game and on life, helps his team win the championship, bringing his football career to a new high and brilliant end (it is revealed that he is in his thirties, and although it is not really mentioned, he would have soon to retire). After the game, the news reporters ask him what he would do after winning the championship game, to which he emphatically states, "I'm gonna take my daughter home." The film ends with him, Peyton, and Monique Vasquez dancing together in his apartment to the song, "Burning Love". 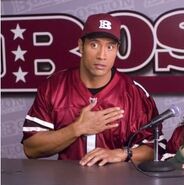 Add a photo to this gallery
Retrieved from "https://disney.fandom.com/wiki/Joe_Kingman?oldid=4076454"
Community content is available under CC-BY-SA unless otherwise noted.