Jordan and Sophia
Joseph Henry "Joe" Ranft was an American magician, animator, storyboard artist, and voice actor who worked for Pixar and Disney. His brother, Jerome Ranft is a sculptor who also worked on several Pixar movies, and is also a voice actor.

Born in Pasadena, California and raised in Whittier, California, Ranft spent much of his youth practicing magic tricks and playing the accordion. At 15, he became a member of the Magic Castle Junior Group. Finishing high school in fall 1978, Joe Ranft began studying in the character animation program at the California Institute of the Arts. After two years, Joe Ranft's student film Good Humor caught the attention of Disney animation executives who offered him a job.

His first five years at Disney, Joe Ranft worked on a number of television projects that never got made. Furthering into his Disney career, he was bumped up into the Feature Animation department, where he received training from Eric Larson. Joe Ranft remembers his training under the Disney Legend as, "[Eric] always reminds me of just the fundamental things that I tend to forget. You know it like, animation is so complex; 'how many drawings are in there?’ and stuff, but Eric always comes back to like; ‘What does the audience perceive?'" [1] Around this time, he studied under and began performing with the improvisational group, The Groundlings. He stayed with Disney throughout the 1980s, doing story work on animated features including The Lion King and Beauty and the Beast.

Joe Ranft reunited with John Lasseter, whom he had previously met at California Institute of the Arts during the late 70's, when he joined Pixar in 1992. He worked on story development for all of Pixar's feature film releases, most recently as Head of Story on Cars.

In the movie Monsters, Inc., Ranft had a monster named after him (J.J. Ranft) as most of the Scarers in the film were named for Pixar staff.

In the DVD of Cars, Ranft can be seen in an interview about the movie. His favorite writers were Kurt Vonnegut, Hunter S. Thompson, and Tom Wolfe.

On August 16, 2005, Ranft and his friend Eric Frierson were passengers in Ranft's 2004 Honda Element, which was being driven by another friend, Elegba Earl. Earl suddenly lost control and crashed through the guard rail while northbound on Highway 1. The car plunged 130 feet into the mouth of the Navarro River in Mendocino County, California. Both Ranft and Earl were killed instantly. Frierson survived by escaping through the sun roof, though he received moderate injuries. Ranft was 45 years old at that time. He was survived by his wife, Sue Barry-Ranft and their two children, Jordy and Sophia, and his brother Jerome. His last two films Cars and Tim Burton's Corpse Bride were both dedicated to his memory.

Igor
(The Nightmare Before Christmas) 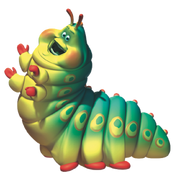 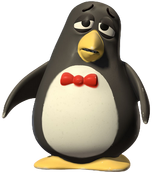 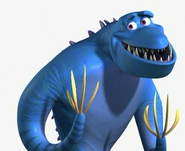 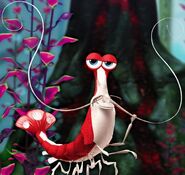 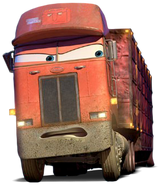 Joe Ranft behind the scenes of A Bug's Life.

Ranft with his kids, Jordy and Sophia, at A Bug's Land at Disney California Adventures in March 2003. 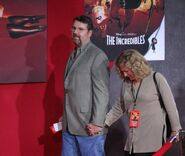 Ranft and his wife Sue at premiere of The Incredibles in October 2004.

Ranft talks to John Lasseter, Andrew Stanton and Pete Docter about the legacy of Toy Story at Pixar in February 2005, just a few months before Joe's fatal car accident.
Add a photo to this gallery

Retrieved from "https://disney.fandom.com/wiki/Joe_Ranft?oldid=3419932"
Community content is available under CC-BY-SA unless otherwise noted.