Joe Rinaldi was born on August 1, 1914 and graduated from Oakland Technical High School in 1932. A gifted draughtsman while working at Disney, he came with concept art from "The Pastoral Symphony" segment of Fantasia. This led further contributions of art and story ideas for features, like Dumbo, Melody Time, Cinderella, Peter Pan, Lady and the Tramp, and Babes in Toyland. He worked on many short films and features up until Sleeping Beauty, when he became a writer for Disney's anthology series.

Frank Thomas said once that Rinaldi had a lot to do with what was great about Lady & the Tramp and The final look of the film was significantly shaped by his drawings. During an episode of the anthology series ("Cavalcade of Songs"), he appeared with Ed Penner, Peggy Lee, and Sonny Burke on a segment that showcased what it was like to bounce ideas back and forth with fellow writers behind the scenes which included artwork from the early stages of Lady and the Tramp. 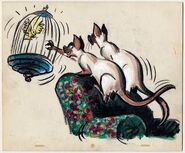 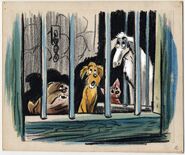