3
Joseph Emanuel "Joe" Roth is an American film producer, director, and businessman. He co-founded the companies Morgan Creek Productions (with James G. Robinson), and Caravan Pictures (with Roger Birnbaum) and founded the production company Revolution Studios. Roth has also directed comedy films, such as America's Sweethearts and Christmas with the Kranks.

For Disney, he served as a chairman from 1994 to 2000 and produced films, such as Angels in the Outfield, Heavyweights, Tim Burton's Alice in Wonderland, Oz the Great and Powerful, Maleficent, Million Dollar Arm, and Maleficent: Mistress of Evil. He also served as executive producer for the 1996 Hollywood Pictures film, Before and After. 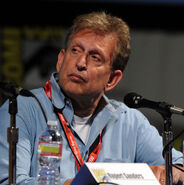 Joe Roth attending the 2011 San Diego Comic Con.
Add a photo to this gallery
Retrieved from "https://disney.fandom.com/wiki/Joe_Roth?oldid=3901711"
Community content is available under CC-BY-SA unless otherwise noted.