1995-present
Joel Edgerton is an Australian film and television actor. He is well known for many film roles, such as Tom Buchanan in the 2013 adaptation of The Great Gatsby and John Connolly in the 2015 drama Black Mass.

For Disney, he is known for portraying Owen Lars in the Star Wars prequel trilogy, Gawain in King Arthur, and Jim Green in the 2012 Disney fantasy drama film, The Odd Life of Timothy Green. 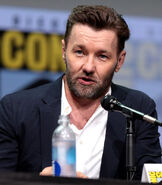