Jennifer Grey
James Katz
Joel Grey is an American stage and screen actor, singer, and dancer best known for his role as the Emcee in both the Broadway and film version of the musical, Cabaret which he won both a Tony and a Best Supporting Actor Academy Award for.

His Disney roles include the guest appearance on The Muppet Show in episode 103 and the voice of Beppo Brown in the Phineas and Ferb episode "Oil on Candace". He was considered for the role of Dr. Terminus in Pete's Dragon.

He also appeared on the ABC Studios show, Alias, playing an imposter of the show's main villain, Mr. Sloane. 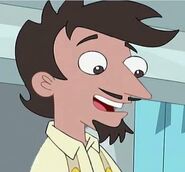 Beppo Brown
(Phineas and Ferb)
Add a photo to this gallery

Joel Grey attending the 2013 Tribeca Film Fest.
Add a photo to this gallery
Retrieved from "https://disney.fandom.com/wiki/Joel_Grey?oldid=4131738"
Community content is available under CC-BY-SA unless otherwise noted.