Fatone was born in Brooklyn, New York City, and at 13, he moved with his family to Orlando, Florida, where he attended Dr. Phillips High School. After finishing school, he worked as a performer at Universal Studios in Orlando, where he played "Wolfie" in Beetlejuice's Rock and Roll Graveyard Revue. Soon, he became a member of NSYNC which put him and his bandmates into the global spotlight.

After the group split up, Fatone branched out into other ventures such as actiing where he appeared in films like My Big Fat Greek Wedding and its 2016 sequel as Angelo and on Broadway with Little Shop of Horrors and Rent. On television, he appeared prominently on the American edition of Dancing with the Stars as a contestant in its fourth and fifteenth season with Kym Johnson as his partner, coming in second and twelth place resprectively. He also was the host of The Singing Bee and a contestant on the first season of The Masked Singer as ”The Rabbit” and came in fourth place. 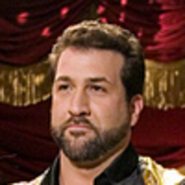