Her Disney roles include Electra in the Hercules episode "Hercules and the Complex Electra", Louanne Winters in the 1993 Touchstone Pictures film, The Program, Alyssa Jones in the 1997 Miramax Films film, Chasing Amy, Jeniece Papagus in the ABC Family TV show, Switched at Birth, Alyssa Jones in Jay and Silent Bob Strike Back, and Dr. Tracy McConnell in the ABC TV show, Grey's Anatomy. 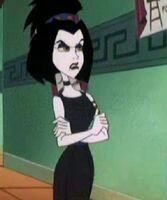 Electra
(Hercules TV series)
Add a photo to this gallery
Retrieved from "https://disney.fandom.com/wiki/Joey_Lauren_Adams?oldid=3897538"
Community content is available under CC-BY-SA unless otherwise noted.