Disney Wiki
Register
Don't have an account?
Sign In
Advertisement
in: People, 1930s births, The Black Cauldron,
and 7 more

1965-present
John Byner is an American actor, comedian, and impressionist, best known for doing the voice of The Ant and the Aardvark.

For Disney, he voiced Gurgi and Doli in The Black Cauldron and hosted the Mouse Factory episode "Man at Work".

John's TV career break happened in New York City on Merv Griffin's "Talent Scouts Show" in 1964. After great exposure on both Garry Moore and Steve Allen's variety shows in 1966 and 1967, he clowned around on Ed Sullivan's showcase program over two dozen times and Johnny Carson late-night haunt over three dozen times. He added to the laughs on Carol Burnett, Mike Douglas, and Dean Martin's self-titled shows and became a veritable favorite with David Letterman and Jay Leno at night. He hosted and starred in his own summer variety series with The John Byner Comedy Hour (1972) which focused on sketch comedy and sitcom spoofs. John's series Comedy on the Road, which aired for four seasons on A&E earned him his second Ace Award. The first came for his uproarious series Bizarre (1980), a half-hour sketch-styled program which aired for six seasons.

As an actor John contributed hilarious moments on popular 1960s and 70s TV sitcom series, such as Get Smart, Soap, Maude, and The Odd Couple and made his film debut in the Barbra Streisand/'Ryan O'Neal' gagfest What's Up, Doc? (1972). While he never found a strong footing in film, he managed to add second-banana fun to a handful of slapstick vehicles for such top comic stars as Rodney Dangerfield.

John's penchant for creating voices led to an expansive career in cartoons and voiceovers for Disney projects, as well as the animated programs Duckman, Angry Beavers, and Rugrats. A cartoon segment titled The Ant and the Aardvark on the animated The Pink Panther Show series had the title characters voiced by Byner, who gave dead-on impressions of Dean Martin and Jackie Mason, respectively.

Byner was born John Biener in New York City, the son of Christina, a mental hospital attendant, and Michael Biener, a truck mechanic.[1] He is currently married to his fourth wife, Anne Gaybis, and has at least four children from his first marriage. His first wife was Eleanor Belcher and his third wife was Croatian actress/singer Ksenia Prohaska. His biography fails to give the name of his second wife, but according to IMDb, it is listed as Sally Fisher. 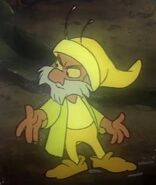