2
John Christopher Reilly is an American actor, comedian, singer, musician, producer, and screenwriter. He is well known for his roles in many comedies, and as a frequent collaborator of Will Ferrell.

For Disney, he voiced Wreck-It Ralph in the 2012 Disney animated feature film of the same name while he is also credited for story contribution to the film, and he reprised his role in the 2018 sequel Ralph Breaks the Internet. He also plays Rhomann Dey in Guardians of the Galaxy, Happy Jack in Gangs of New York, Amos Hart in Chicago (which he was nominated for both a Golden Globe and Oscar for), Mr. Murphy in the 2005 Touchstone Pictures film, Dark Water, Officer Kellogg Curry in the 1996 Touchstone Pictures film, Boys, and narrated Bears. 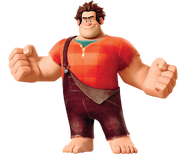 John C. Reilly behind the scenes of Wreck-It Ralph.

John C. Reilly with Wreck-it Ralph at the film's premiere in October 2012.

John C. Reilly behind the scenes of Ralph Breaks the Internet.

John C. Reilly speaks onstage during the 30th annual Producers' Guild Awards in January 2019.
Add a photo to this gallery
Retrieved from "https://disney.fandom.com/wiki/John_C._Reilly?oldid=4070689"
Community content is available under CC-BY-SA unless otherwise noted.