1949-2005
John Donald Fiedler was an American actor and voice artist, who was slight, balding, and bespectacled, with a distinctive, high-pitched voice. He appeared in many movies, such as True Grit with John Wayne, A Raisin in the Sun with Sidney Poitier both on stage and film, and The Odd Couple with Jack Lemmon and Walter Matthau. Other appearances include 12 Angry Men, The World of Henry Orient, and The Cannonball Run. Fiedler also appeared on television shows, such as Cheers, The Golden Girls, and The Bob Newhart Show.

For Disney, John Fiedler was best known for voicing Piglet in the Winnie the Pooh franchise and currently holds the record for the longest running voice actor to ever voice a Winnie the Pooh character, having voiced Piglet for 37 years until his death. John Fiedler's final role as Piglet was in Pooh's Heffalump Movie, released in February 2005, 4 months before his death.

John Fiedler also voiced the Porcupine in The Fox and the Hound, the Deacon Owl in The Rescuers, Sexton Mouse in Robin Hood, and Rudy in The Emperor's New Groove. Additionally, he played Wally Thorpe in Midnight Madness and Charles Blackburn in The Whiz Kid and the Mystery at Riverton. John Fiedler also appeared in The Golden Girls episode, "Love Me Tender", playing a love interest of Dorothy, and he appeared in the film, Rascal as C.Y. Jenkins. 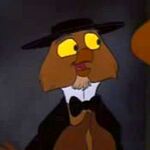 Porcupine
(The Fox and the Hound)