Molly Evangeline Goodman
John Stephen Goodman is an American actor, voice actor, and comedian, known for his distinctive deep Southern drawl voice. He is probably best known for his recurring role as Daniel "Dan" Conner on the ABC sitcom Roseanne, and for being the host of Saturday Night Live fourteen times. He is also well-known for playing Charlie Meadows in Barton Fink, Fred Flintstone in the 1994 live-action adaptation of The Flintstones, Walter Sobchak in The Big Lebowski with Steve Buscemi as Donny, John Chambers in Argo, Neal Nicol in You Don't Know Jack, and Gil John Biggs in the political satire series Alpha House. He even voiced Rex, the protagonist of the Universal Pictures animated film, We're Back! A Dinosaur's Story.

For Disney, he is known for voicing James P. Sullivan in Pixar's Monsters, Inc. and its prequel Monsters University. He also reprised this role in the Pixar video games Monsters, Inc. Scream Arena, Cars: Mater-National Championship, and Cars: Race-O-Rama. Additionally, he voiced Pacha in The Emperor's New Groove, Kronk's New Groove, and the TV series The Emperor's New School (Season 2 only). He even voiced Baloo in The Jungle Book 2 and Eli "Big Daddy" La Bouff in The Princess and the Frog.

Additionally, he starred in various Touchstone Pictures films, such as Ed Munn in Stella, William "Bill" Sanford in Coyote Ugly, Big Dan Teague in O Brother, Where Art Thou?, and Graham Bloomwood in Confessions of a Shopaholic. 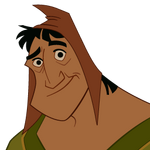 John (as Fred Flintstone) with Baloo on the cover of Disney Adventures (June 1994).

John Goodman behind the scenes of The Emperor's New Groove.

John Goodman behind the scenes of Monsters Inc.

John Goodman and Billy Crystal behind the scenes of Monsters, Inc.

John Goodman at premiere of Monsters Inc in October 2001.

John Goodman behind the scenes of The Princess and the Frog.

John Goodman behind the scenes of Monsters University.

John Goodman holding a Sulley Funko figure at the premiere of Monsters University in June 2013.

John Goodman speaks at the Alpha House panel at the 2014 Summer TCA Tour.

John Goodman at his Hollywood Walk of Fame ceremony in March 2017.

John Goodman speaks at The Righteous Gemstones panel at the 2019 Summer TCA Tour.
Add a photo to this gallery

Retrieved from "https://disney.fandom.com/wiki/John_Goodman?oldid=4131880"
Community content is available under CC-BY-SA unless otherwise noted.