Atandwa Kani
John Kani is a South African Broadway actor, director, and playwright who has won a Tony Award for his performances in The Island and Sizwe Banzi is Dead.

For Disney, he portrayed King T'Chaka in Captain America: Civil War and in Black Panther. He also voiced Rafiki in the 2019 version of The Lion King.

For his role in Captain America: Civil War, he taught Chadwick Boseman real phrases in the African language of Xhosa to make their interactions more realistic. 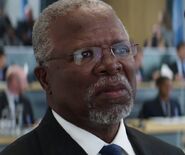 Rafiki
The Lion King
(2019 live-action adaptation)
Add a photo to this gallery
Retrieved from "https://disney.fandom.com/wiki/John_Kani?oldid=3831634"
Community content is available under CC-BY-SA unless otherwise noted.