Allegra and Lucas (both with Maurer)
John Alberto Leguizamo is a Colombian-American actor, stand-up comedian, film producer, playwright, and screenwriter. He is well-known for starring in about 75 different films, including Carlito's Way, The Pest, and The Babysitters, as well as voicing Sid the sloth in the Ice Age franchise. He also voiced Gune in Don Bluth's 2000 sci-fi animated film, Titan A.E..

For Disney, he played Sergio in A Pyromaniac's Love Story, Luigi in the 1993 Hollywood Pictures film, Super Mario Bros., and Vinny in the 1999 Touchstone Pictures film, Summer of Sam. He also voiced Tziloco in the third season of Disney Channel/Disney Junior's Elena of Avalor and Gor Koresh in The Mandalorian. He voices Bruno Madrigal in Encanto. 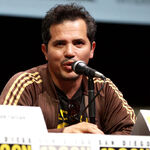 John Leguizamo and Carla Gugino attending the screening of The Counselor in October 2013.

John Leguizamo with wife Justine Maurer and their kids Lucas and Allegra attending the 72nd Tony Awards in June 2018.