Disney Wiki
Register
Don't have an account?
Sign In
Advertisement
in: People, Voice actors, Phineas and Ferb,
and 36 more

William O'Hurley (with Mesloh)
John George O'Hurley, Jr. is an American actor, comedian, singer, author, game show host, and television personality who is well known for his role as J. Peterman in Seinfeld.

He has taken on several voice roles for Disney, most notably the Phantom Blot in Mickey Mouse Works and House of Mouse, and is one of many actors who have participated in narrating the Candlelight Processional at EPCOT. O'Hurley voiced Cameron Landisburg in Pepper Ann, Johannes Niels in The Legend of Tarzan, King Nova in Buzz Lightyear of Star Command, and Captain Excellent in Teamo Supremo. He has also voiced Roger Doofenshmirtz in Phineas and Ferb, and he has made guest appearances in 101 Dalmatians: The Series, The Emperor's New School, K.C. Undercover, Pair of Kings, and Wizards of Waverly Place. He also voiced King Wallace in Kim Possible, King Cinyras in Hercules, and a mini-golf knight in Gravity Falls. In addition, he does the safety spiel for the Astro Orbitor at Disneyland. Additionally, he voiced Hadithi in The Lion Guard and Rex in the Mickey Mouse episode "The Fancy Gentleman".

Johannes Niels
(The Legend of Tarzan) 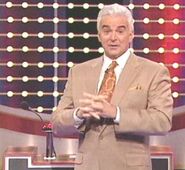 O'Hurley on an episode of Family Feud.