1
John William Oliver is a English comedian and political satirist, best known for his work on The Daily Show, Community, and Last Week Tonight with John Oliver. He is also well-known for voicing Vanity Smurf in the live-action Smurfs films and Steve the porcupine in the 2019 Paramount/Nickeldeon animated film Wonder Park.

For Disney, he voiced Wax Sherlock Holmes in the Gravity Falls episode "Headhunters" and Coach Green in Randy Cunningham: 9th Grade Ninja. He voiced Zazu in the 2019 version of The Lion King. 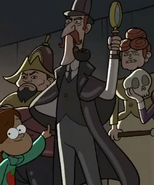 Zazu
(The Lion King;
2019 live-action adaptation)
Add a photo to this gallery

John Oliver, Billy Eichner and Seth Rogen facing Zazu, and Timon & Pumbaa for the 2019 live-action adaptation of The Lion King.
Add a photo to this gallery

Retrieved from "https://disney.fandom.com/wiki/John_Oliver?oldid=3694991"
Community content is available under CC-BY-SA unless otherwise noted.