James and Nina
John Deszo Ratzenberger is an American actor, director, producer, screenwriter, singer, entrepreneur, voice artist, and comedian, best known for his role as Cliff Clavin in Cheers. He reprised this role for Mickey's 60th Birthday and Disneyland's 35th Anniversary Celebration. He has also voiced many characters in all the Pixar features, with at least one performance on a Disney live-action television film.

The running gag of Ratzenberger portraying at least one character in every Pixar movie is referenced during the end credits of Cars; when Mack watches the Cars-parodies of previous Pixar films and he thinks that whoever did the voice of Hamm, Yeti, and P.T. Flea (all in car form) were great actors until he realized it was the same voice actor in all those films and asks, "What kind of a cut-rate production is this?".

P.T. Flea from A Bug's Life is Ratzenberger's personal favorite character of his Pixar roles.

The Underminer
(The Incredibles) 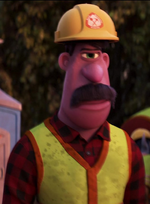 Fennwick
(Onward)
Add a photo to this gallery

Ratzenberger behind the scenes of Toy Story

Ratzenberger behind the scenes of A Bug's Life

Ratzenberger behind the scenes of Monsters, Inc.

Ratzenberger at premiere of Toy Story 3 in June 2010

Ratzenberger at premiere of Planes in August 2013

Ratzenberger at premiere of Coco in November 2017

Retrieved from "https://disney.fandom.com/wiki/John_Ratzenberger?oldid=4066599"
Community content is available under CC-BY-SA unless otherwise noted.