The character of the same name by George W. Trendle

“If we ride together, we ride for justice.”
―John Reid to Tonto[src]

John Reid, known by his identity as "The Lone Ranger", is the protagonist of the Disney's 2013 film, The Lone Ranger. He is portrayed by Armie Hammer.

When he boards a train home to Colby, Texas, ready to practice law with his East Coast degree, John Reid is a stalwart idealist, firmly opposed to the violent ethics of the frontier, where justice is regularly meted out by gunshot. Little does Reid know that a chance meeting with Comanche warrior Tonto, will set off a series of events that change him into the enigmatic hero, the masked Lone Ranger.

John Reid is a tall white man with brown hair. He is commonly seen dressed in black. He wears a black jacket, which has a Texas Ranger badge on it, and a black blouse underneath. He wears black trousers with a brown belt. He wears white shoes and a white cowboy hat. He wears a bandanna around his neck and his most recognizable feature is his black mask in front of his eyes.

The character of John Reid/The Lone Ranger was created for radio-serials in 1933 by George W. Trendle and/or Fran Striker. Thanks to the popularity of the radio-show, the Lone Ranger and Tonto went on to be staples of American pop-culture who notably appeared in comic-books and a popular TV series which ran from 1949-1957.

Returning home to Colby, Texas aboard a train, John Reid noticed people running across the roof. Taking it upon himself to investigate, he soon discovered Butch Cavendish holding a gun on an Indian man, named Tonto.

Butch quickly took aim at John and made him drop his weapon, a shovel. Tonto quickly reached for a fallen pistol and took aim at Butch. Butch dropped his weapon and Tonto readied to fire. However, John knocked the pistol from Tonto's hand and picked it up off the ground, aiming it at Butch.

In pursuit of Butch, John, the Rangers and his brother Dan were riding along through a valley. The Rangers and Dan were eventually killed and John was left for dead by Butch, his men and Collins, a Ranger and traitor. John was later found by Tonto, who dug graves for the Rangers.

As Tonto was scouring the bodies for materials, John awoke and snatched his hand. Tonto rendered him unconscious with a rock and soon noticed a white spirit horse approaching John's grave.

In 1933, a young boy named Will met Tonto and asked about his adventures with the Lone Ranger. Tonto told him the story of their meeting and their stopping of Latham Cole. After the tale was told, Tonto left and began walking in the desert of his past adventures, alone.

The Lone Ranger appears in this Donald Duck cartoon amongst several popular figures from film and television from the late 1930s.

The Lone Ranger and Tonto were DLC characters for this game who came with their own world themed around their 2013 film. Within the world, players used the duo's abilities with tomahawks and gun-slinging to fight Butch Cavendish.

During 2013, Lone Ranger themed root-beer drinks would be served at the Disney Parks in Frontierland areas to promote the films. These were slushy-like drinks with ice-cream floats that would be served in glasses made to resemble cowboy boots with the Lone Ranger title and logo featured upon them. This was done to assist in promoting the film.

In the Magic Kingdom's Frontierland, the Lone Ranger is amongst the legendary figures whose memorabilia can be found in Pecos Bill's possession at the Pecos Bill Tall Tale Inn & Cafe. Namely, the Lone Ranger's mask and silver-bullet are on display albeit with his plaque not featuring the character's name (likely for copyright/trademark reasons). His signature is also featured on Bill's honorary Texas ranger certificate from 1894, identifying Reid as having worked under Governor Sam Houston at the time.

The Lone Ranger in Disney Infinity

The Lone Ranger in Disney Infinity 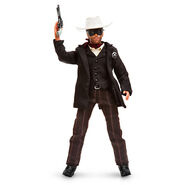 The Lone Ranger in The Autograph Hound 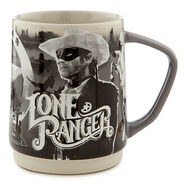 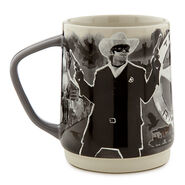 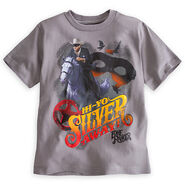 John on the right

John "The Lone Ranger" in the 2.0 edition