1
John Phillip Stamos is an American actor, comedian, and musician. He is known for his work in television, especially in his starring role as Jesse Katsopolis on the ABC sitcom Full House and its Netflix spinoff Fuller House. Since the show's finale in 1995, Stamos has appeared in numerous TV films and series. He also played James "Jimmy" Martino in the Fox/ABC Studios TV show, Grandfathered. He even hosted the short-lived web-series Losing It with John Stamos.

For Disney, he appeared in The Wonderful World of Disney: Disneyland 60 and The Mickey Mouse Club. He was also mentioned in the Stuck in the Middle episode "Stuck with Mom's New Friend" and Guardians of the Galaxy. He even played Chef Louis in The Wonderful World of Disney: The Little Mermaid Live!. He currently plays Marvyn Korn in the Disney+ Original Series Big Shot.

In addition, he is also a collector of Disney memorabilia. He purchased the original "Welcome to Disneyland" sign, and also owns one of the original elephants from the Dumbo the Flying Elephant ride.

Marvyn Korn (Big Shot)
Add a photo to this gallery

John Stamos at his Hollywood Walk of Fame ceremony in November 2009. 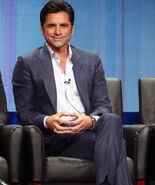 John Stamos speaks at the Grandfathered panel at the 2015 Summer TCA Tour. 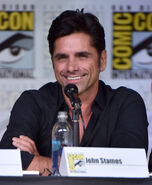 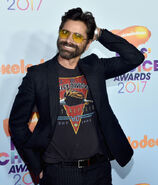 John Stamos attending the 2018 American Music Awards.
Add a photo to this gallery
Retrieved from "https://disney.fandom.com/wiki/John_Stamos?oldid=4559161"
Community content is available under CC-BY-SA unless otherwise noted.