Eric, John, Ronald, and Diane
John Sutherland was an American producer, writer, animator, and voice actor, known for Too Many Winners (1947), It's Everybody's Business (1954), and Working Dollars (1956). He was married to Paula Winslowe.

His only works for Disney were being an animator for the 1931 animated short The Beach Party and providing the voice for Adult Bambi in Bambi.

John Sutherland claimed that he gave voice to the adult Bambi in Walt Disney's classic movie. Through the cartoons he produced later in his career, he would give voice to a philosophy that shaped many people’s ideas about business, government, and society.

Sutherland met Walt Disney through a mutual show-business connection: According to Sutherland’s son, Ronald, Sutherland was tutoring actor Spencer Tracy’s son, and Tracy introduced the tutor to Disney. He had also worked for UCLA's comptroller, who put in a good word with Roy Disney. The studio hired him on September 12, 1938, as an assistant director on Bambi. He made $50 a week, and according to Dave Smith, archivist at Disney, Sutherland's pay was bumped to $55 a week on May 22, 1939. A move to the story department on June 19, 1940, didn’t bring a salary change, but Sutherland was content to learn the business.

Sutherland's biggest claim to fame at Disney was voicing the adult Bambi. According to Sutherland, he also created Thumper. Disney’s own records are not conclusive, although several sources credit him with the performance. According to Disney archivist Smith, Sutherland tested for Owl on April 3, 1939, for Mr. Hare on May 4, 1939, and for Mouse on February 2, 1940. He recorded dialogue, ultimately unused, for all three characters. "There is no mention of him testing for adult Bambi," Smith said. "I don't find any names or recording dates for an adult Bambi." Smith said Disney’s practice at that time was not to credit every voice actor. "Very few people received screen credit in those days. It just wasn't the custom. The people doing the voices for animated films were never credited, nor were unit production managers or dialogue directors." Whatever the truth behind the credits, Sutherland had another close association with Bambi's voice talents: He married Paula Winslowe, the voice of Bambi's mother.

Bill Melendez animated at Sutherland's studio before he also became a producer. He recalled that Sutherland told him he was a writer on Bambi. "Why he didn't get credit at Disney is strange," he said, "but many people there had to fill certain requirements to qualify for the credit, and I don't know what was required."

Working for Disney, the burgeoning cultural force behind 1938's groundbreaking, genre-busting Snow White, was a far cry from working as a park ranger in Montana and South Dakota, Sutherland's previous employment. Born September 11, 1910, in Williston, N.D., John Elliot Sutherland enjoyed a comfortable childhood. His father, Ronald Duffas Sutherland, was president of banks in North Dakota, South Dakota, and Montana. But severe droughts caused a number of loans to go bad, and the banks went under. To begin anew, Sutherland's family moved from Great Falls, Mont., to California, which for many Americans held the allure of a more prosperous future. Sutherland would spend the rest of his life in southern California, earning a degree in politics and economics from UCLA in 1937. It's unlikely that he knew then how large a role politics and economics would play in his animation career.

Sutherland left the Disney studio on September 28, 1940. "Walt complimented me on my work and said he would be glad to recommend me for a job or funding prospective animation or live-action films I would write or produce," Sutherland wrote. He left the studio ahead of the crippling strike against Disney that began in May 1941. Eric Sutherland, one of John's sons, felt that, given his father's strong belief in the free-enterprise system, Sutherland would not have supported the strike. And since Sutherland was not on Disney's payroll when the strike occurred, his friendship with Walt Disney was not damaged. He soon honored his agreement to recommend Sutherland to other studios. In 1941, Darryl Zanuck, president of both 20th Century Fox and the Motion Picture Academy of Arts, approached Disney about producing some industrial training films. Disney, who was not then seeking involvement with that type of project, referred Zanuck to Sutherland. "At Mr. Zanuck's request, I went to Washington in July of 1941 as a writer, director, and producer of training films and supportive print materials for the army, navy, and air force with the understanding I would return to Hollywood as necessary," Sutherland said.

Sutherland saw first-hand at Disney that producing quality work meant hiring the right people. The roster of people who passed through the studio is a mid-century who's who: Joseph Barbera, True Boardman, Arnold Gillespie, George Gordon, William Hanna, Emery Hawkins, Abe Levitow, William C. Nolan, Eugene Poddany, Phil Roman, Art Scott, Frank Tashlin, and Carl Urbano all worked there. Melendez left the UPA studio for Sutherland's greener pastures when Sutherland showed him more green, doubling his salary to $250 a week. "John Sutherland was a hard working and very dedicated man to his animation studio," Melendez said. "I found it easy to work with him. I remember once, John's father was visiting the studio and stopped at my room to chat. He asked me, 'How can you stand working for John?' John had a reputation for being a hard taskmaster and also an impatient and insensitive boss. I found him an easy person to get along with and also a spirited taskmaster. He always had top animators and his philosophy about animation was to animate his films as well as anything from Disney. All of John's films are first-class animation!" 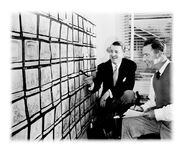 Add a photo to this gallery
Retrieved from "https://disney.fandom.com/wiki/John_Sutherland?oldid=3941396"
Community content is available under CC-BY-SA unless otherwise noted.