Jett Travolta †
Ella Bleu Travolta
Benjamin Travolta
John Joseph Travolta is an American actor and singer, who gained popularity in the 1970s after appearing as Vincent "Vinnie" Barbarino on the ABC sitcom Welcome Back, Kotter and starring as Tony Manero and Danny Zuko in the box office successes Saturday Night Fever and Grease, respectively. He also co-starred with Kirstie Alley in the Look Who's Talking film trilogy as James Ubriacco.

For Disney-related productions, he voiced the title character of the 2008 Disney animated feature film, Bolt and played Charlie Reed along with his late wife, Kelly Preston as Vicki Greer and their daughter, Ella Bleu as Emily Greer in the 2009 Disney comedy film, Old Dogs. He also played Woody Stevens in the 2007 Touchstone Pictures comedy Wild Hogs, George Malley in Phenomenon and Mike Kennedy in Ladder 49.

John Travolta provided the voice for the successful 2008 animated feature, Bolt. In interviews after the movie, Travolta speaks much of his work with Disney Animation Studios and the experience of proving the voice work for animated dog and a main character, Bolt. John Travolta has been asked many times in the past to do animated features, however, according to the actor himself, Bolt was the first character that intrigued him.

In an interview with a reporter from CBS Travolta explained:

"I've been asked several times over the years to do animated feature. However, Bolt was the first time that indicated as the right character. Whenever anyone asks you what animal you remind yourself of, people always chose the dog for me and I didn't disagree with them. So when i read this script and saw this character, so guiless, so, kind of, naive and fun and touching, I said, you know, maybe this is the one to do."

When speaking of his work with the animators Travolta often mentions the voice recording and how they would take inspiration from his facial expressions.

"They do need your expressions of your face to animate so sometimes they will film you a little bit whilst you're doing your voice and they'll take ideas from your own expressions. I think the biggest compliment I got was that the animators really enjoyed sketching to my voice." 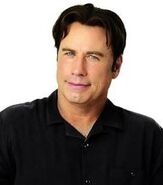 John Travolta behind the scenes of Bolt. 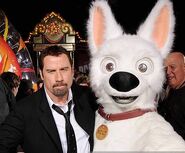 John Travolta with Bolt at the film's premiere in November 2008.