John Christopher "Johnny" Depp II is an American actor, voice actor, comedian, producer, and musician. His first major role was in the 1984 classic horror film, A Nightmare on Elm Street as Glen Lantz, boyfriend of Nancy Thompson and one of Freddy Krueger's victims. In 1990, he was cast as the titular character of Tim Burton's Edward Scissorhands, which was the beginning of his long collaboration with Burton. The film is now owned by Disney following Disney's acquisition of 20th Century Fox (is now becoming 20th Century Studios). He also portrayed Gilbert Grape in the 1993 Paramount Pictures' What's Eating Gilbert Grape?, Frederick Abberline in the 2001 horror film, From Hell, Willy Wonka in the 2005 Warner Bros. film, Charlie and the Chocolate Factory, and voiced the titular character in the 2011 Paramount/Nickelodeon animated film, Rango and Sweeney Todd in the DreamWorks film, Sweeney Todd: The Demon Barber of Fleet Street, which earned him an Oscar nomination.

His Disney roles include Ed Wood in the 1994 Touchstone Pictures film of the same name, Captain Jack Sparrow in the Pirates of the Caribbean franchise, (which he received a Best Actor Oscar nomination for) J.M. Barrie in the Miramax film, Finding Neverland (which he received another Best Actor Oscar nomination for), Tarrant Hightopp in the 2010 film, Alice in Wonderland and in the 2016 film, Alice Through the Looking Glass, and Tonto in the 2013 action Western film, Lone Ranger. He also played the Wolf in the 2014 film, Into the Woods.[1]

He was named a Disney Legend in 2015, but unlike the others in that class, he was not named in advance.

He is the only actor to have three of his characters appear in the Disney Infinity series. He was mentioned in the Hannah Montana episode "That's What Friends Are For?". He is mentioned in Jessie as being Zuri Ross's godfather. 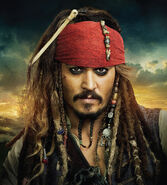 Tarrant Hightopp
(Alice in Wonderland and Alice Through the Looking Glass) 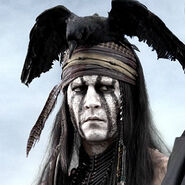 The Wolf
(Into the Woods)

Johnny Depp at Pirates of the Caribbean: On Stranger Tides premiere in May 2011.

Johnny Depp at premiere of The Lone Ranger in June 2013.

Johnny Depp at premiere of Alice Through the Looking Glass in May 2016.