Disney Wiki
Register
Don't have an account?
Sign In
Advertisement
in: Characters, Character stubs, The Replacements characters,
and 11 more

Mr. and Mrs. Hitswell (parents), unnamed little sister, unnamed brother (presumed)
Johnny Hitswell[3] is a character from Disney's The Replacements. He was Riley Daring's boyfriend since "The Perfect Date", but broke up in "Heartbreak in the Big City", although, he wanted to start the relationship again in "A Tale of Two Rileys". He's a baseball player. He is voiced by Dee Bradley Baker.

"Seriously what did you think? That I was going to dump you for a super model or something?"

Johnny as he appeared in Season 2 with Riley 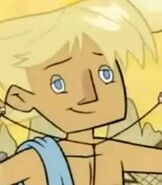